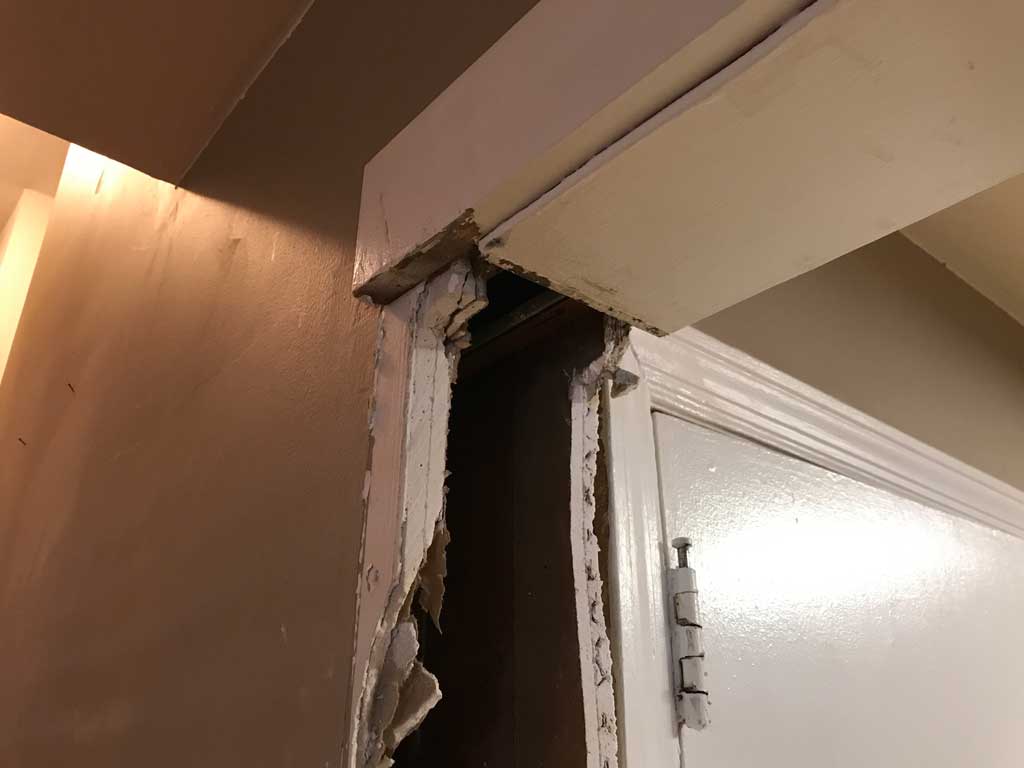 Delivery will be on Thursday sometime between 4:00 pm and 6:00 pm. That’s what we were told when we purchased our new Samsung French Door refrigerator at Best Buy.  But let’s just say there were some complications.

Our old refrigerator was white and our stove, microwave and dishwasher are stainless steel. That’s what happens when you do a kitchen renovation yourself. You see buying a new fridge that matches all of your other appliances just wasn’t in the budget at the end of that project. So the white fridge was an eyesore for a few years but at least it worked. Well it worked until it didn’t. 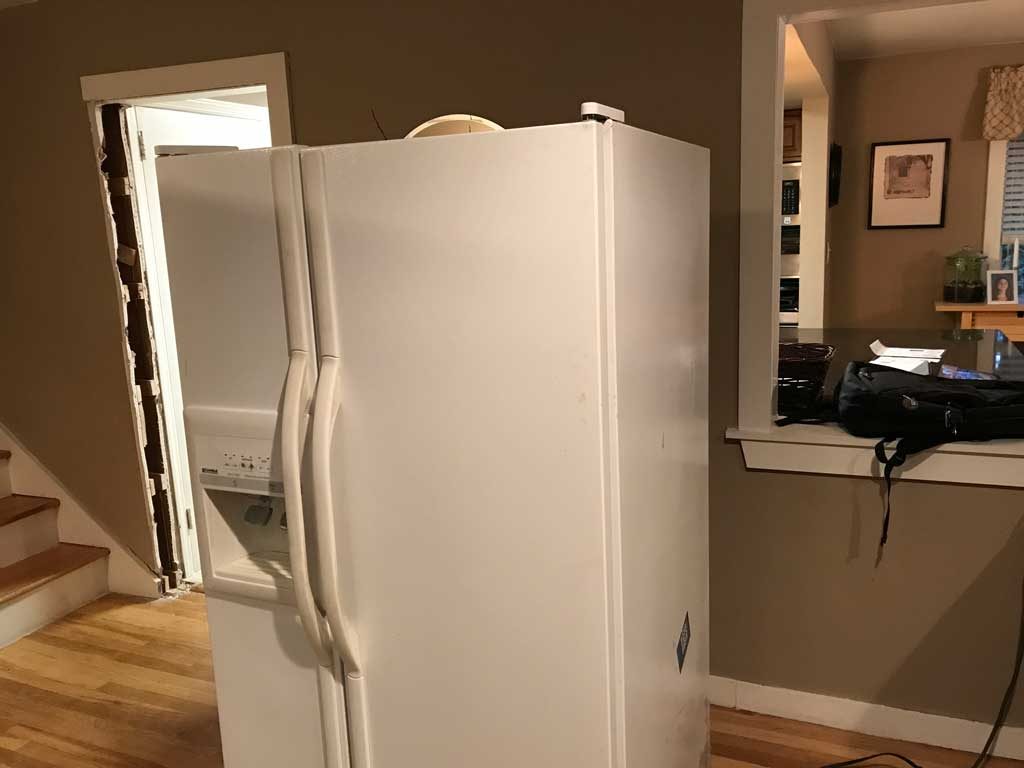 First my daughter broke the water dispenser. She was a destructive tween before she became a destructive teen and she “accidentally” snapped it right off. Having water shoot straight at your crotch was not desirable so I had to lock it. That wasn’t great but we still could use the ice dispenser so we’d get by. I got a Britta water jug and kept it in the fridge for drinking water and that was great until the ice machine broke too. I woke up one morning and there was a huge puddle on the floor. The water wasn’t staying in the ice making area long enough to freeze and it just dripped through the door and onto the floor. So that had to be disconnected too. Then we starting using some ice trays. All in all, none of this was world ending but it was pretty inconvenient. Especially because the kids always took the ice and drank the water and never filled up the Britta or the ice trays. 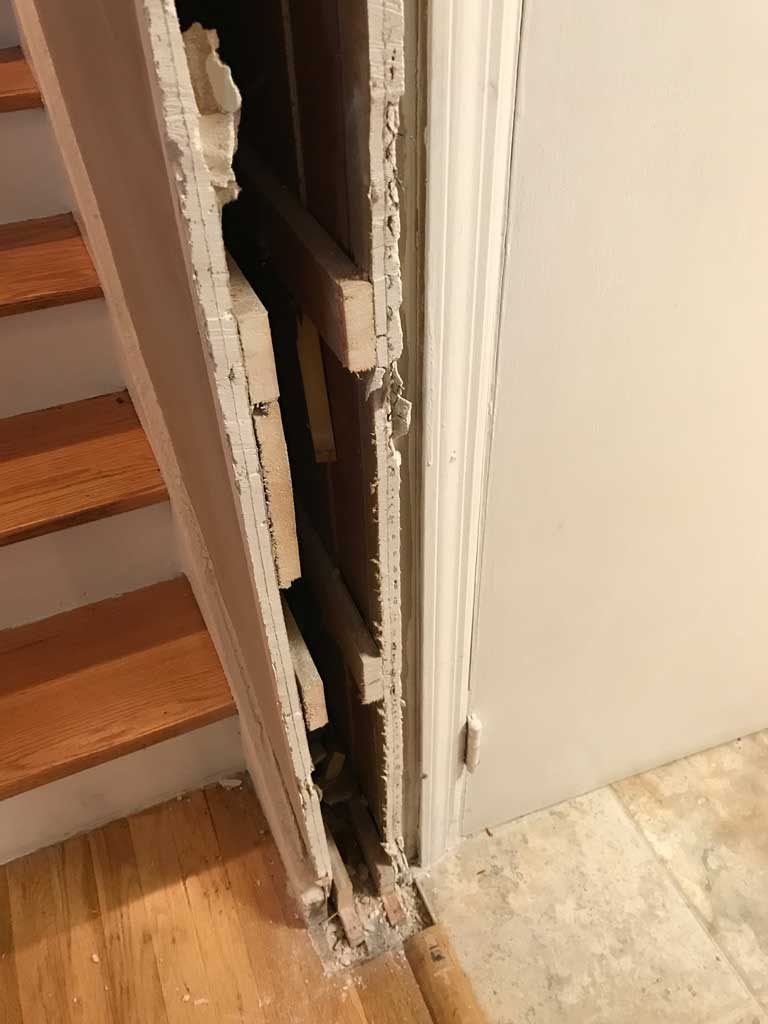 Another thing that always bothered me about that fridge was it’s size. When we moved into our house, the cabinets layout only allowed a tiny space for the fridge. So we had to buy a small 20 cubic foot fridge. Maybe it was 21 cubic feet but it was a really small fridge. In order to fit all the food we had, you had to stack things on top of each other and then you could never find anything without taking everything out and moving things around. It was really annoying. And for a family that really cooks just about every meal at home, we needed a much bigger fridge.

Delivery will be on Thursday sometime between 4:00 pm and 6:00 pm. There’s that sentence again. Well like I said before, there were complications. The delivery guys showed up 20 minutes early. That wouldn’t have been a big deal but I was still driving home and wouldn’t be there for another 10 minutes. I left work to get home in time for delivery between 4:00 pm and 6:00 pm. The impatient delivery guys were waiting and getting ready to leave when I showed up at 3:50 pm. 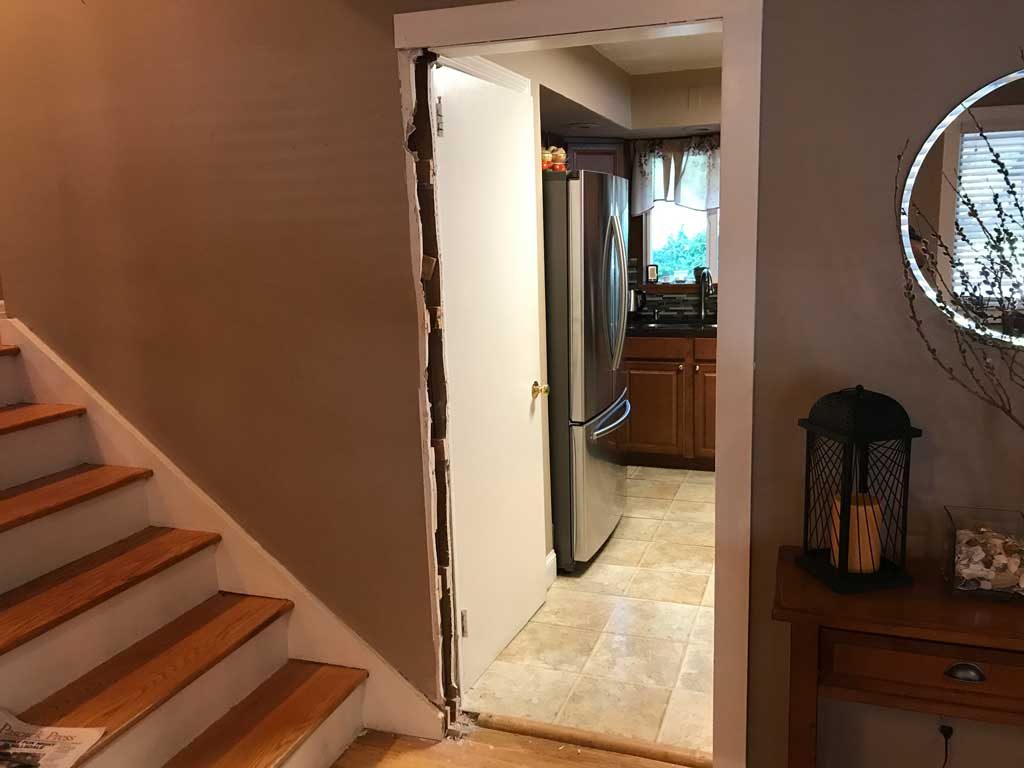 Another thing I was unhappy about was that my kids let the delivery guys in when I wasn’t home. There should be some policy about entering a home when no adults are there but that was my kids fault.

The delivery guys measured the kitchen doorways and as I already knew, they were short about 4 inches. So even if they took the fridge out of the box and took the doors off it was still 4 inches too wide to fit through our kitchen doorway. 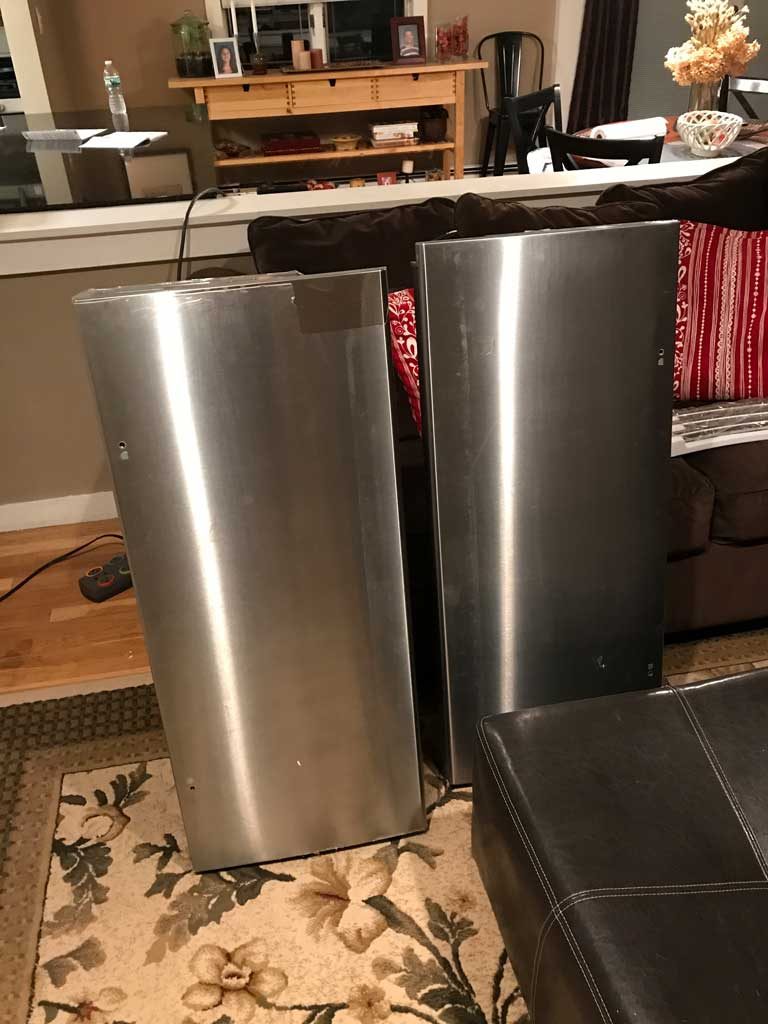 I knew this when I bought the fridge and planned on cutting the door frame with my reciprocating saw before they got there between 4:00 pm and 6:00 pm. It would only take like 10 minutes so I got my saw and told them to wait. After all it wasn’t even four o’clock yet. 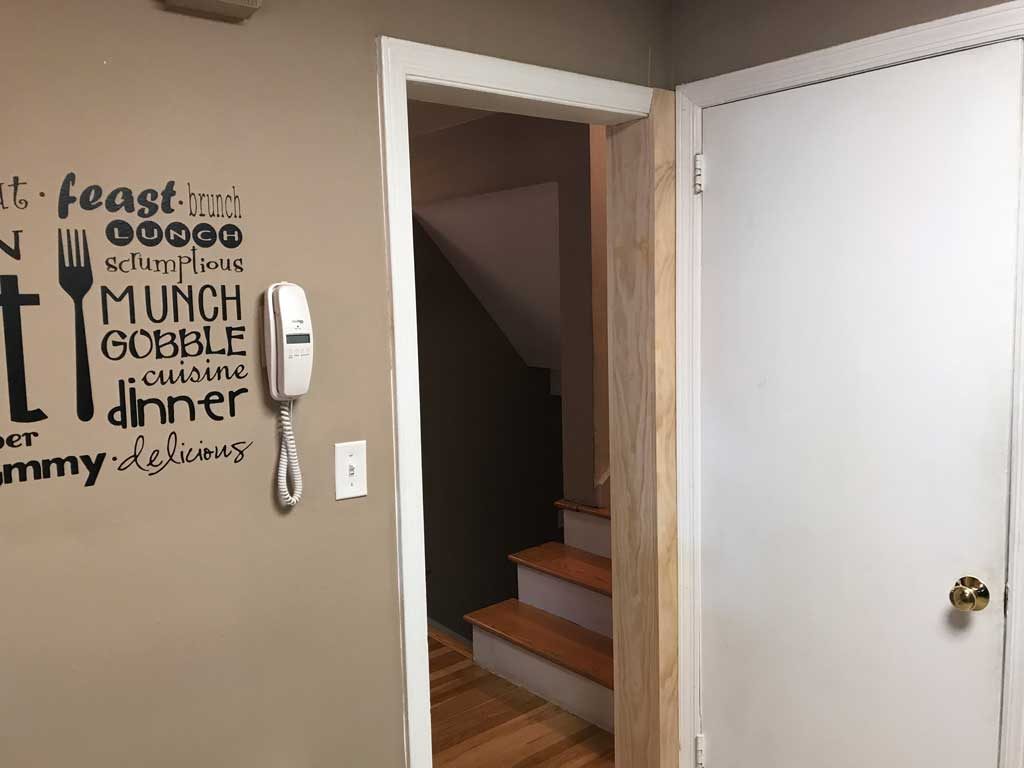 But they would not wait. They said they were leaving right now. I quickly ignored their attempts to get me to sign the delivery papers and got my saw and started cutting the door frame. I didn’t even take my coat off and was going through the wood trim of the doorway like it was butter. The trim came right off but I still needed to cut a few inches of sheet rock too.

I wish that I could have videoed my house that day because it would have made good YouTube. Sheetrock dust is everywhere, the delivery guys are pacing and trying to get me to stop cutting up my house and my kids are yelling, “No tip, no tip” because they didn’t like how the delivery guys were rude to me.

Finally they said they were leaving right now and wouldn’t wait another minute. They were going to put the fridge back on the truck and make me reschedule. I still wasn’t done cutting the doorway but they seemed really pissed at me. They shouldn’t have been because it still wasn’t even 4:00 pm yet. 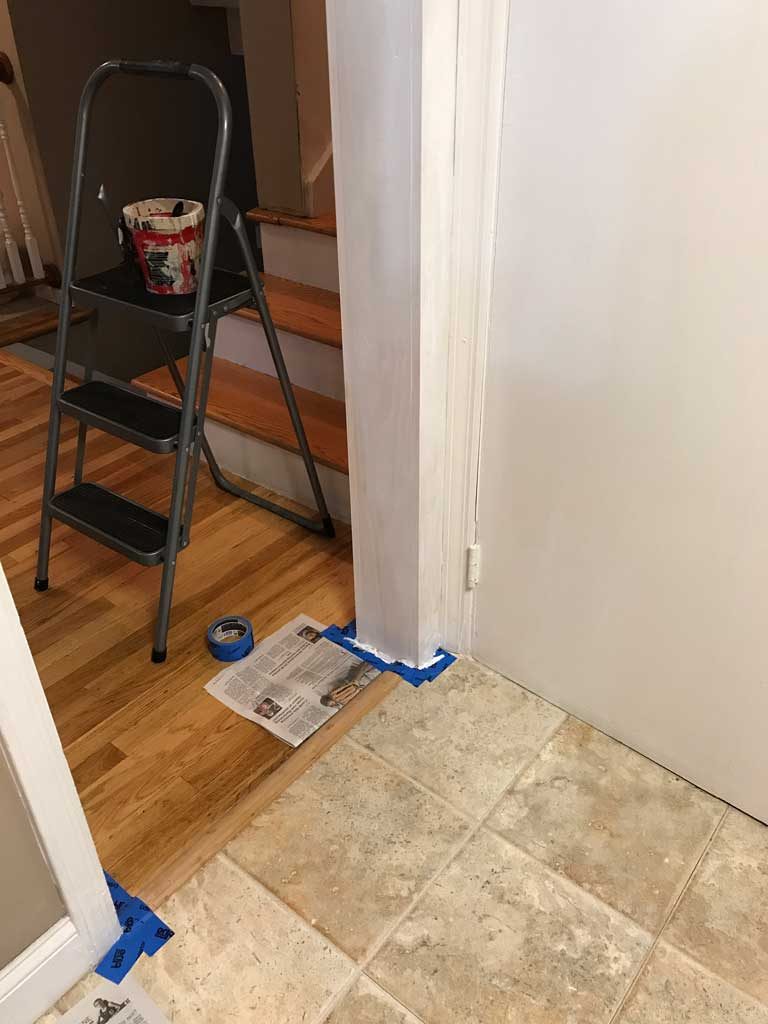 I gave in because I didn’t want to reschedule the delivery and told them to deliver the fridge into my living room which they did in about 1 minute. I signed the delivery paper and followed my children’s advice and didn’t tip them because it still wasn’t 4:00 pm when they left.

At 4:05, I was done cutting and had my extra four inches. Now if I removed the fridge doors, it would finally fit into the kitchen.

But you see, I’m not a professional fridge delivery guy so taking the doors off and moving the fridge into the kitchen took the better part of the evening. At 10:00 pm, the delivery was complete. I plugged it in and started moving in the food from the old fridge. The following day, my son and I would build a ramp and roll the old fridge out the front door and relocate it to the garage.

Overall, we’re very happy with the new fridge. It’s huge, it matches all the other appliances and the water and ice work great. They’re located inside of this fridge which is a nice feature. 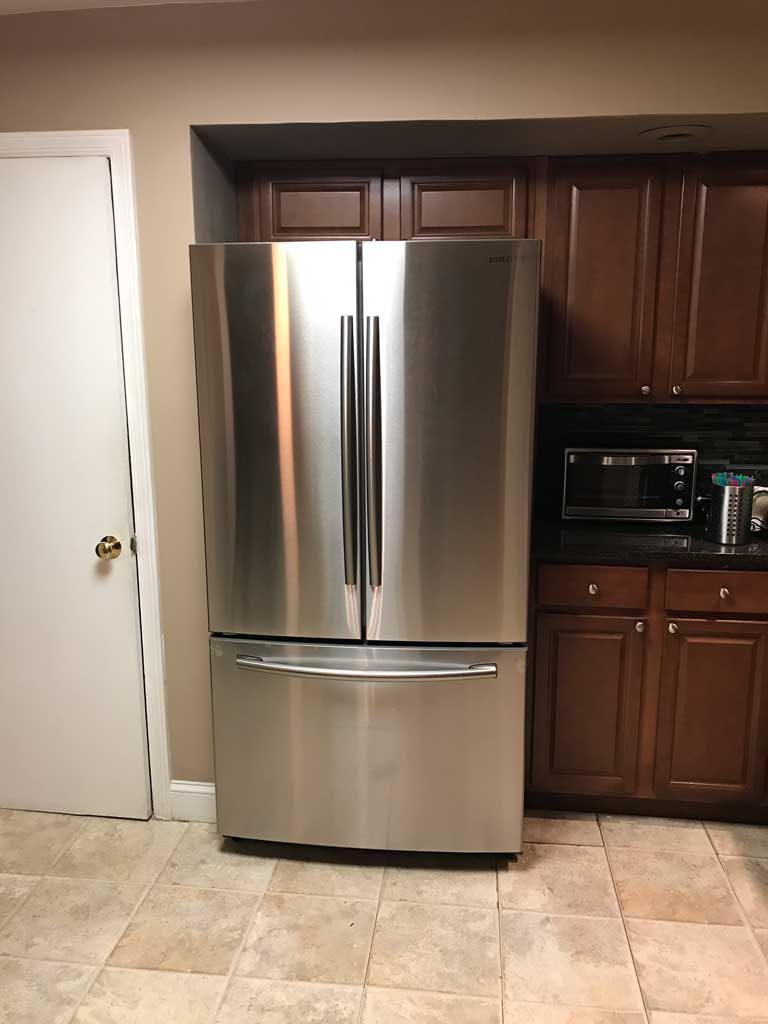 So if someone tells you “Delivery will be on Thursday sometime between 4:00 pm and 6:00 pm” be sure to clear your schedule until 10:00 pm and also the next day. Because that’s when you’ll have to build a new doorway.