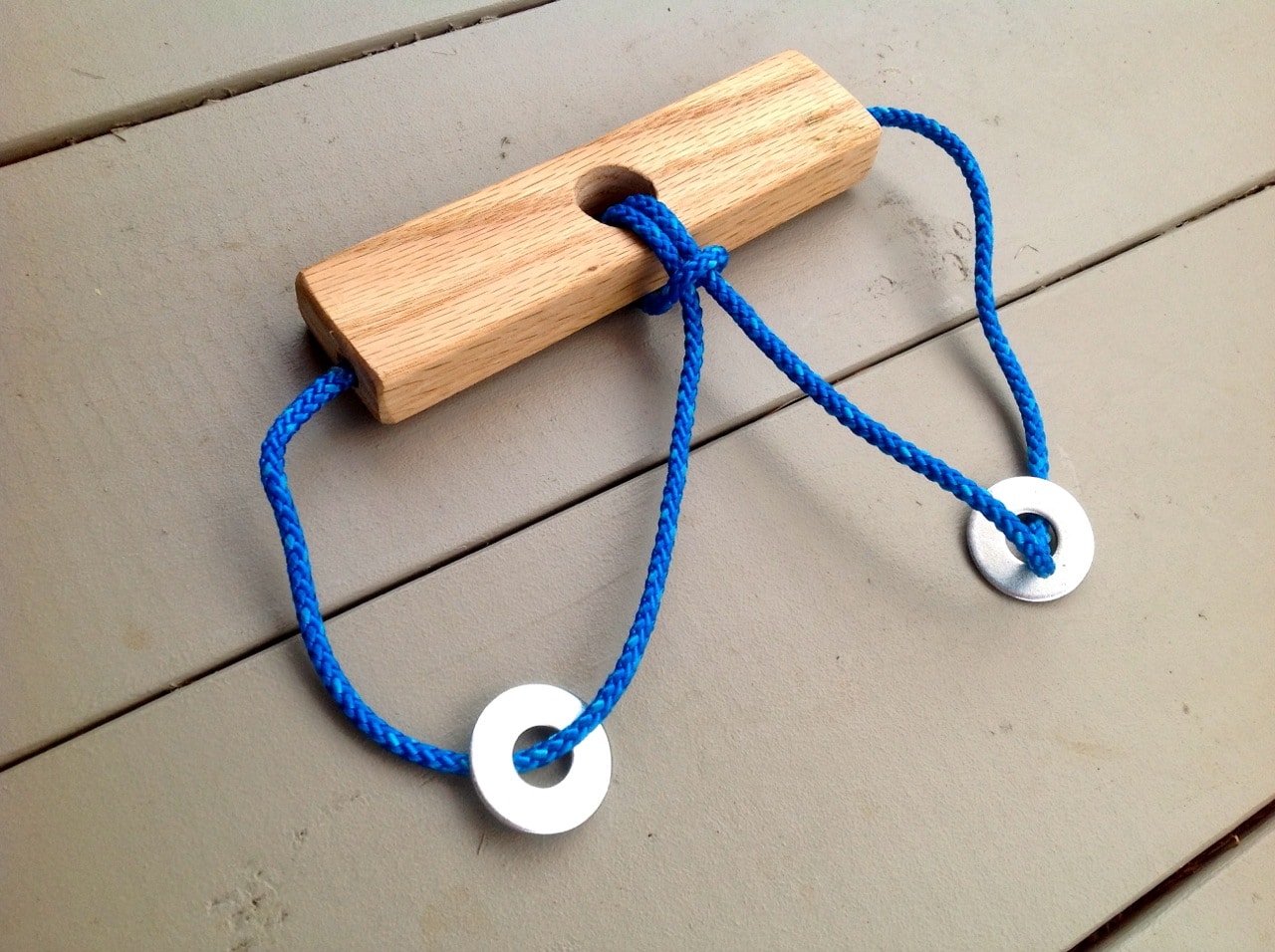 Not all of the projects that I work on have important messages like the refurbish, reuse theme in yesterday’s post about fixing up an old garden bench. No, sometimes I just like to cut wood for fun. And building a two ring puzzle was one of those times.

As far as woodworking goes, there really wasn’t a lot of wood cutting in this project but it was enjoyable anyway. The background of this story is that I bought a book called, Crafting Wood Logic Puzzles: 18 Three-dimensional Games for the Hands and Mind

by Charlie Self. The book description reads:

So after reading that fantastic bit of marketing, I decided on the spot that I had to have this book. It sounded right up my alley. Who doesn’t want to learn “specialized cutting, drilling, sanding glue and finishing techniques”? And after I used the most deadly part of Amazon, the 1-Click order feature, the book was mine.

The first wood logic puzzle that I tried was the two ring puzzle. It was at the beginning of the book and it looked like something I do with my kids so I figured it would be a good place to start. The book is filled with a lot of great puzzle plans but my favorite is the probably the instructions for building a great table saw sled for the those tough cuts. That was worth the price of book by itself.

To make a Two Ring Puzzle, you’ll need is a block of wood, some string and a couple of washers. As for tools if you buy a nice piece of hobby wood with a 1″x2″ dimension all you really need a saw to cut it to length, a sander and a drill with a spade bit. Make sure spade bit is smaller than your washers. To attach the string to the wooden block you could use glue or a screw. I actually drilled a hole 1/4″ deep on each side, stuffed the end of the strings in the hole then used a glue gun to secure it. I considered using my brad nailer just in case people really wanted to pull the heck out of the rope while trying to solve the puzzle but opted not to. And it seems to be holding up just fine with the glue.

The two ring puzzle works like this. You have this block of wood with a hole in it and a strings with the washers on them. The washers sit on the two loops of string that are knotted and separated by the hole in the center of the wood block. The puzzle is to get the washers on the same side but it’s tricky because the washers are bigger than the hole.

The book also shows you how to solve all the puzzles too. I’ll offer up a hint on how to solve this and say that the washers don’t fit through the hole but the knot does.

It probably would have looked nicer if I stained it but I was too excited to try it out. Maybe someday I will stain it. But I plan on making more of the wooden puzzles in this book so I will probably be busy doing that instead. I think there’s a soma cube in my future.