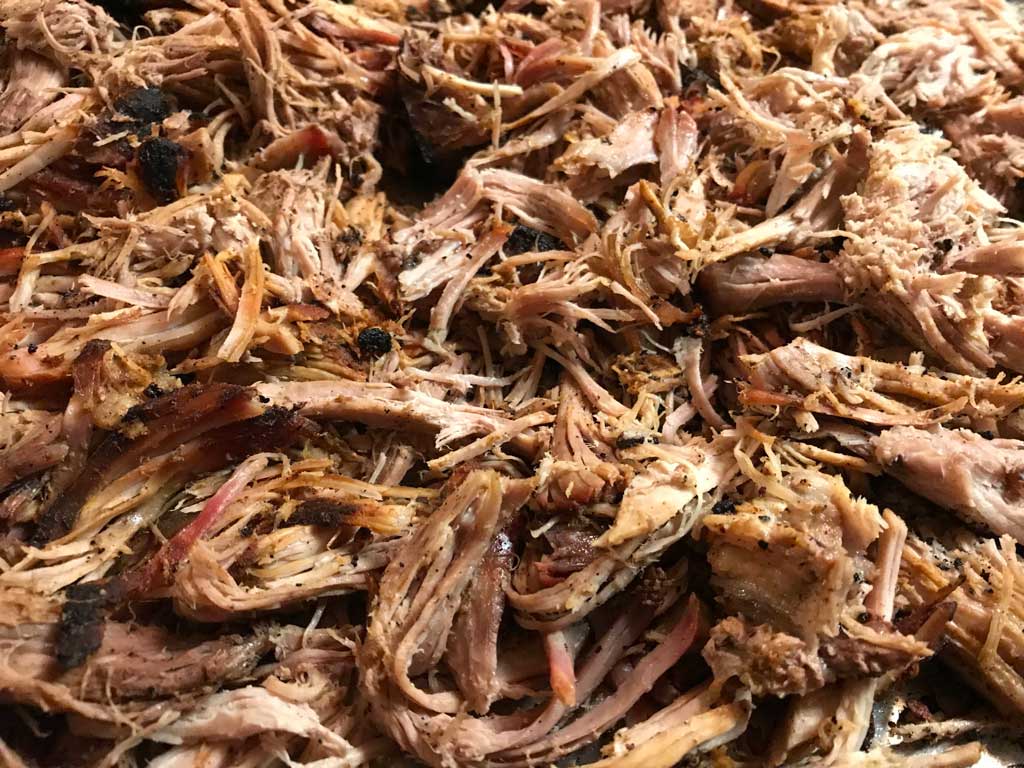 Smoking a pork shoulder on the weekend is a great way to have delicious dinners during the week with only a minimal amount of cooking.  With this Smoked Pork Shoulder Recipe, you’ll be able to use it to quickly and easily make some great dinners that are cheaper and tastier than takeout.

Meal prep is becoming a really popular way for people to eat homemade cooking and skip the takeout. No one has time to cook anymore. I don’t get home from work until 7:30 pm. There’s no way to make a full meal and not wind up eating sometime after 9:00 pm. So with some extra work on the weekend, I can whip up something good that the whole family enjoys within 20 minutes. 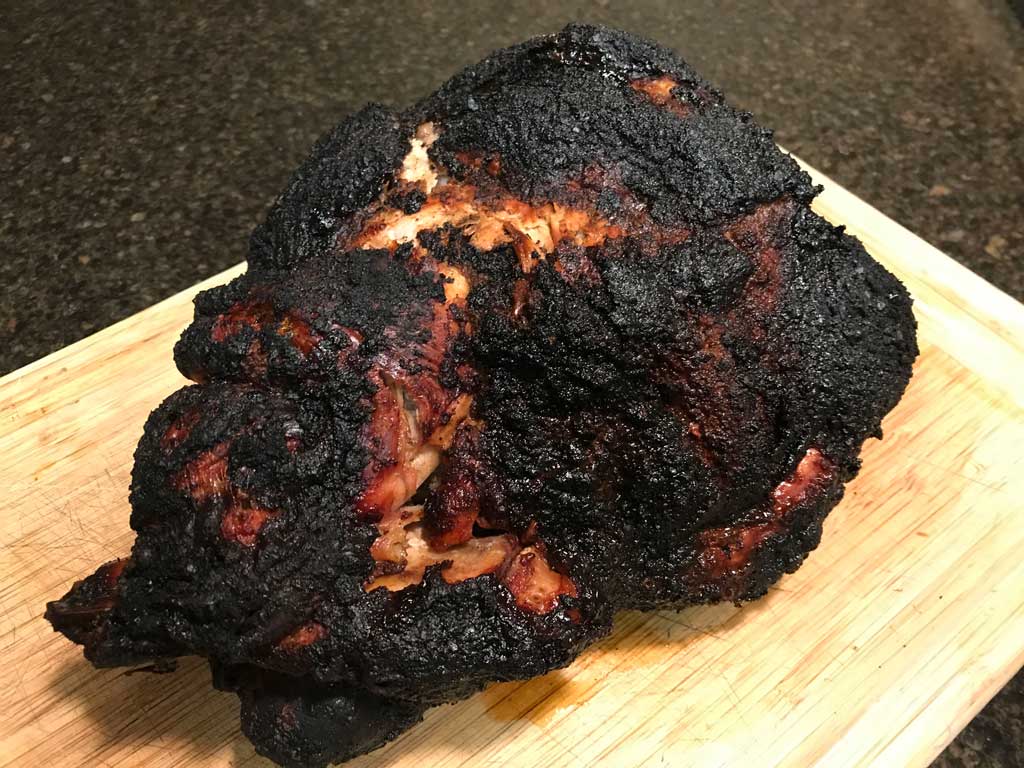 Doing the bulk cooking on the weekends and then using the leftovers during the week to prepare quick but delicious meals is working out pretty well for my family. It’s kind of like meal prep but I do it a little different.  Most meal prep is done with a main course and sides and packaging it all up so it just needs to be reheated like a TV Dinner. I take more of the Food Truck approach. These Food Truck cooks make their big ticket items like their meats in a commercial kitchen the night before and pack it into the trucks and use it as a main ingredient in their dishes. For example, they might smoke a brisket for 8 hours and then use it on their truck to make a brisket sandwiches with a bunch of fresh ingredients.

So that’s sort of what I like to do. Make a main ingredient on the weekend, like this Smoked Pork Shoulder Recipe and then use it to make several other meals during the week.

The pork shoulder has a lot of fat. That they key to the great flavor but it’ll also add to the prep time. When you trim a pork shoulder, you should plan for at least 20 minutes. And you’ll probably lose about a 1/3 of the weight after you trim all the fat. Sometimes you have to cut so much that you’ll need butchers twine to tie it all back together. Trim of the thick fat on the outside of it. Run your fingers over the meat and cut any out thing that’s hard or looks like something that you won’t want to eat. Just take your time and don’t be afraid to cut away too much.

What is a Boston Butt

Around the time of the American Revolutionary War, butchers used to pack prized cuts of pork into barrels. This was done for storage and also for transporting them. These barrels used to be call butts. And the pork shoulders that came from Boston became know as Boston Butts.

Pork needs to be cooked to 145 degrees to be safely eaten. It used to be higher I think because of Trichinosis. But I guess that’s not a problem any more. Must be because of antibiotics and vaccinations. But that’s not really a great subject to talk about when you’re trying to make something delicious.

How To Brine Pork

Here’s my brine recipe. Apple cider or Apple cider vinegar can be used as the liquid. Then add in the kosher salt and brown sugar.


You need a big container to fit the whole pork shoulder. I found some great marinating brine containers with lids on Amazon. Or you can put it in a large pot. But the problem with that is that it have to stay refrigerated. I have an extra fridge in my garage that I mostly use for for beer. Everyone should have a beer fridge. But I can move some things around and rearrange the shelves in order to fit a 5 gallon pot with a pork shoulder & brine in it. If you don’t have the room in the fridge then you should probably look into these containers as alternatives. They can also be used to marinate other meats or even Sous Vide.

So let the meat brine for about 24 hours. Then take it out and pat it dry and the next step is the dry rub. 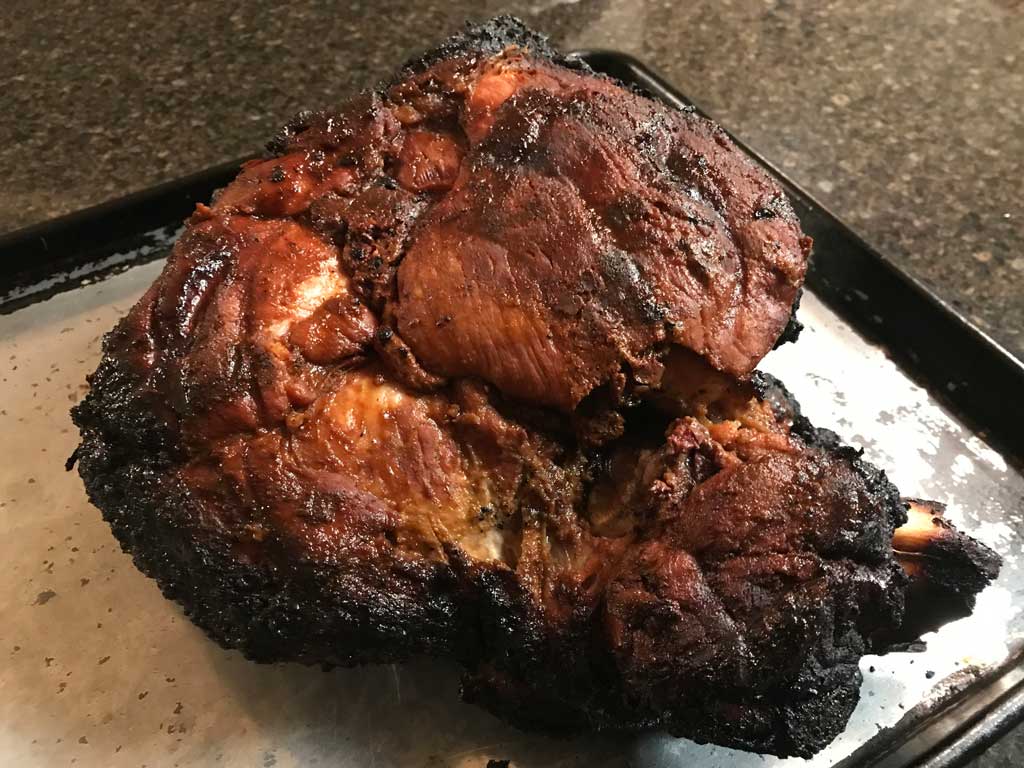 Let the dry rub sit on the pork for about an hour a pound. So if you pork shoulder is 5 pounds, you want about 5 hours.

Now there’s lot of ways to use a smoker. It’s absolutely an art form. But here’s what I do with my beginner smoker. The Char Broil Big Easy Smoker is a great starter smoker that can give you great results while you’re learning the ropes.

I put my pork shoulder in the cage and load it into the smoker. The smoker should be at about 225. The first hour or so gives it a nice crust. The rub and the smoker make it crunchy and crispy without burning it. When you reach 160 degrees, take it out and wrap it in foil. Then continue cooking it until your reach 199 degrees.

There’s lot of variations of the above that you can try. For instance, instead of foil a lot of smokers like to use butchers paper. I’ve even seen people use plastic wrap to keep the moisture in and then paper around it. You’d think that things like plastic and paper shouldn’t go into something with heat but that’s how they do it. Like I said, I’m a beginner smoker so I just use foil because it comes out great every time. Easy and repeatable is what I’m looking for in my smoker recipes.

When you reach that 199 degrees, no big deal if you miss by a few degrees but make sure it’s over 195 or so. That’s where the muscle ligaments melt and you’ll have less chewy stuff in there. Take the pork shoulder out and let it rest for a while. Now if you bought boneless pork should then just shred it up. The ones with the bones in them are a lot cheaper though. So you’ll have to take the bones out. As you’re shredding up the meat search for those bones. There’s usually a big giant one that looks like something you’d see a cartoon dog chomping on. But there’s some smaller things in there that you’ll want to get rid of. If you don’t want to eat it then go ahead and take it out.

Meal prep is becoming a big part of my weekends. Making this smoked pork shoulder recipe is a great way to get a bunch of awesome meals prepped and ready for the week. They’re also great for the kids to heat up for a meal after school. When I was young we had snacks after school but it seems that now kids like to eat a whole meal. Sounds good to me.