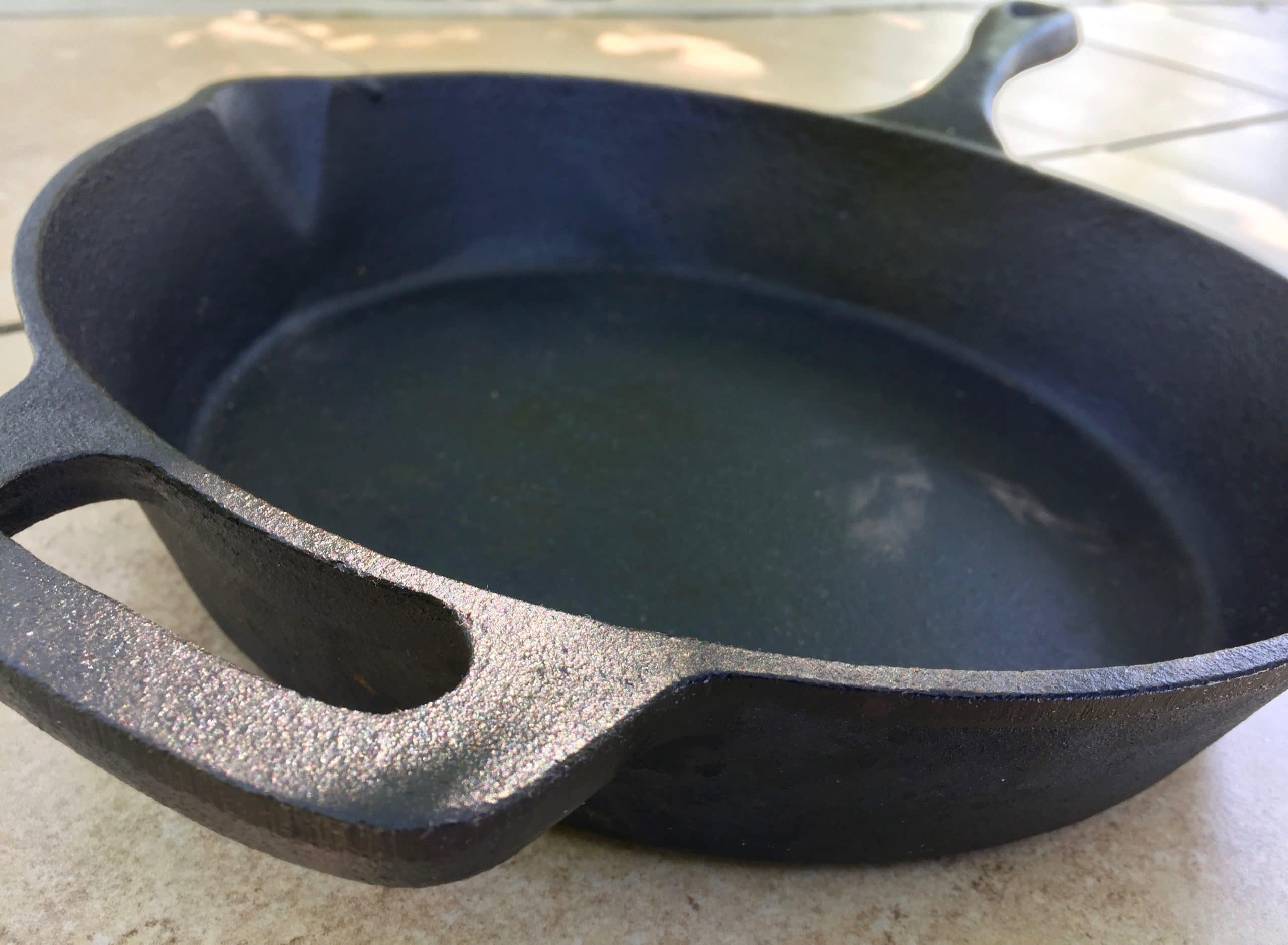 Have you seen those frying pan commercials on TV? You know the ones where they demonstrate how non-stick the pan is by sliding sunny side up eggs around in it or by burning a slice of American Cheese. Look it just slides right out! I love those commercials but I don’t cook with those pans. It seems that we keep finding out that the old fashioned ways of doing things are the best ways. Look at how popular cooking in cast iron is getting. It seems like all of my favorite food bloggers have these great cast iron skillet recipes lately. So an important skill to have is seasoning a cast iron skillet.

Pans nowadays are made to be thrown out after a year or two. That sucks.  Once upon a time you got a cast iron pan and you kept it. You took care of it and you were able to cook a lot of meals with it. Your mama would leave you her pan in her will and you brought it with you in your covered wagon when you went west seeking fame and glory. Wait, I might be going a little too far in the past to be relevant

What’s the deal with seasoning a cast iron skillet?

It’s important to remember when seasoning a cast iron skillet to coat the pan, top and bottom with Crisco or other solid shortening. Then put it in an oven at 350 for an hour. Let it cool in the oven. When it’s cooled down you can put another coat on it and repeat the process a few times if you want. The more time you put into it, the better it’ll come out.

And then when you start using your skillet, don’t wash it with soap.

I used to work at a diner and I remember cleaning that grill all of the time. I took a metal screen and a stone block and scrubbed it while it was hot. Tough stain, I used to put a little water and scrub harder. Same with the skillet. Get some paper towels and moisten them and wipe the pan out. Heat it back up again to dry it and you’re ready for next time.

The first few times you cook with your newly seasoned cast iron pan you should cook something high in fat like bacon. This will improve the seasoning.

I saw this deep dish pizza recipe on one of those food blogger sites that was cooked in a skillet and I can’t wait to try it. Pizza in a pan? Yes, please.

Also i’m a big fan of the frittata. Leftover Italian sausage and broccoli raab always makes it into a frittata the next day. I like to start cooking them on the burner to make sure the bottom is cooked and a little crusty and then I put the whole thing in the oven to bake. The cast iron skillet is perfect for that.

So if you thought seasoning a cask iron skillet was hard, it really isn’t. You just need a little patience and you’ll be frying slices of American Cheese in no time.