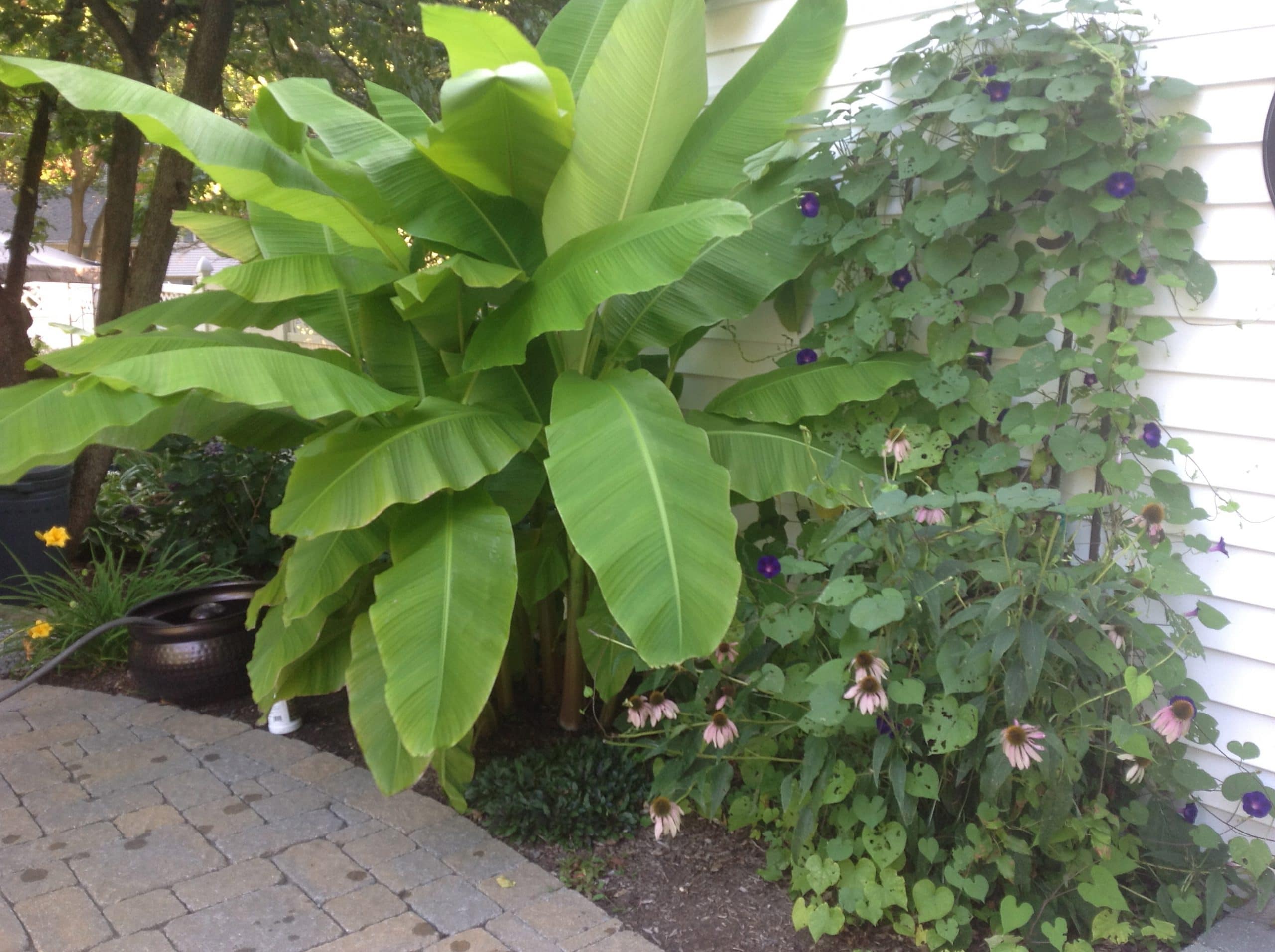 Even though I live in New Jersey, I still like to grow banana plants. Their big green leaves give my pool & patio and nice tropical feel. And who doesn’t want to feel like they are in tropics? Every so often, when my kids are trying to drown me, I look around and see the banana plants and right before I gasp for air, I get a nice tropical feeling.

Back in 2006, when I was really into garden blogging, I would tear through any plant catalog that I could get my hands on, looking for interesting things to grow so that I could blog about them. I just happened to stumble onto Musa Basjoo (Hardy Banana). The catalog said that it was a banana tree that could survive a winter in Zone 7 and it could grow up to 10 feet tall. A ten foot tall banana tree that would survive a New Jersey winter? Why wouldn’t I buy one of them. I’m surprised I didn’t buy two.

Now these plants will not grow bananas that you can eat and in fact up here in the Northeast, they will rarely set fruit. But my goal was to have nice big green leafy plants and I was not disappointed.

When Plant Delights sent me the plant, I was actually pretty disappointed because it was this tiny little stick of a plant. Nothing against Plant Delights, they are great but when you have visions of hacking your way through an untamed jungle of banana trees and you receive something the size of a leek, you tend to be disappointed. Well, I adjusted my expectations and I potted up my new hardy banana stick. I used a big 22 inch pot and filled it with mostly compost and a little bit of a bagged manure from Home Depot. I probably should have added some light fluffy potting soil too because a big pot like that is hard to move when it’s filled with compost.

So now here we are in 2015 and my musa basjoos are still going strong. Not only did the tiny little stick turn into a 6 foot banana tree but every year since then, the musa basjoo created “pups”. It basically grows more plants from the root ball or the “corm”. All you have to do is cut those pups off of the corm and plant them up. With lots of fresh compost in the pots or in the ground where I eventually started planting them. At one point I had about 19 of them that were all over 5 feet tall. And I had tiny little non-edible bananas once too. That was pretty cool.Yes, Musa Basjoo are hardy to Zone 7 but I live in Zone 6. At first I thought about leaving them in the ground and mulching heavily or setting up a fig tree-like enclosure around them. But I scrapped that idea and just decided to dig them all up and store them in my garage. Better to play it safe. The garage isn’t heated but it rarely goes below 40 degrees.

Bringing in the potted plants in is pretty easy. I just drag those heavy pots into my garage. The banana plants that are in the ground aren’t too much work either. The roots are not very deep or strong so digging them up really isn’t a big chore. A shovel in the ground is usually enough to get them out. Even the 6-8 foot plants come right out.

The best part of overwintering Musa Basjoo is using my garden machete. It makes me feel like a jungle explorer, hacking my way through the local vegetation. Hmm, I think I’m sensing a theme. Maybe I shouldn’t have gotten into computers and reached for that dream job of jungle explorer. I could have worked with Dora and Boots.

I wait until after the first frost and then chop all the leaves off with my garden machete. Then I dig out the stems and wrap them up in burlap or newspapers and store them in a large pot or a garbage can. I even wad up more newspaper and add them to the container for additional insulation. This seems to work fine. Since they produce new plants every year I don’t always bring them all in.

When spring comes, I just dig new holes and add plenty of compost and we’re ready to go. And I just noticed that you can actually buy Musa Basjoo