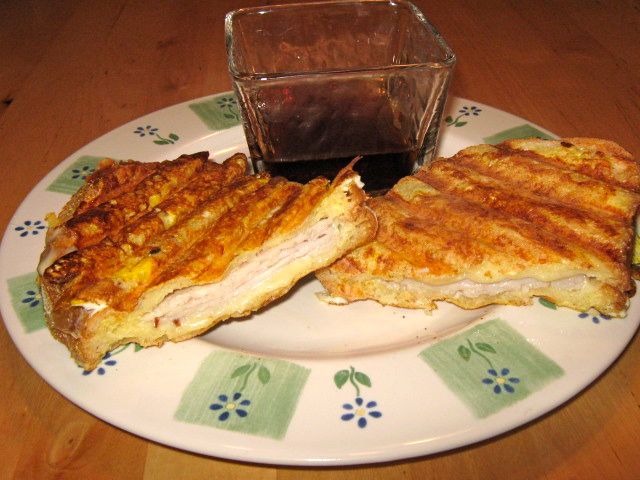 The Monte Cristo is another great sandwich recipe that you can easily convert into a panini.  I used to love ordering a Monte Cristo as a late night snack at my local diner.  The combination of the sweet French Toast style bread and saltiness of the Ham and Swiss Cheese is great at any time of the day.

How to Make a Monte Cristo Panini

The Count of Monte Cristo is a classic book that was written by Alexandre Dumas and he had absolutely nothing to do with the Monte Cristo Sandwich.  But if I was locked up in prison for years, the first thing I’d do when I got out would be to fire up the panini grill and make a Monte Cristo Panini.

As usual, there are lots of options when making a Monte Cristo.  Starting with the choice of bread.  Since the bread will basically become French Toast you might way to try a nice egg bread like you’d get on Easter.  Or to make it heartier, go with a sour dough loaf and slice it thick.

Now it’s time for the sandwich part.  Ham and Swiss Cheese are the usual ingredients but it can also be made with Turkey.  Sometimes I have leftover gruyere from when I go on a fondue bender and so I’ll use that for Monte Cristo Panini the next day.  Gruyere is even better than regular Swiss.

And since the cost of vanilla extract has gone through the roof you use vanilla almond milk instead of the milk and vanilla. I think it tastes even better this way.

You can follow this Monte Cristo Recipe or come up with your own variation.  Either way, it’ll be great.