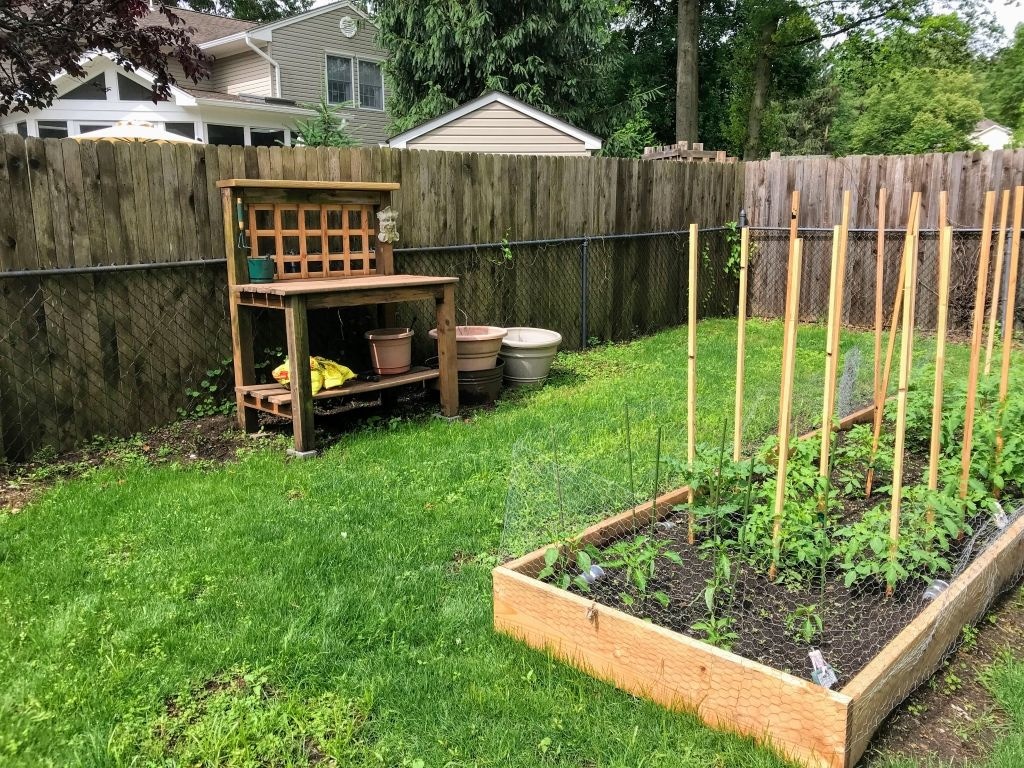 I’m a big fan of having a dedicated work space for the task that you’re working on. I have a workbench in my garage workshop, I have a craft table in the family room and I have a office desk where I get all my computer work done. But when it comes to the garden I didn’t have any where to get things done except for on the ground. You know what I did have though? I had a big swing set that my teenage kids no longer use. So let me tell you how to build a potting bench from recycled lumber.

A potting bench is a great spot to get things done in your garden. When I’m in my garden, I used to just leave my garden tools on the ground. I’d have to bend over to pick up the rake or the hoe or the drill. This was no fun because bending over to pick things up is my mortal enemy. My back has seen better days. So with a potting bench there’s less bending.

Plus a potting bench is also the best place to re-pot plants. I mean, that’s what it’s for, right?

Where To Get Lumber To Recycle

In order to build a potting bench from recycled lumber, you need some old wood. And I knew exactly where I could find some old wood. My kids are in high school now and it was years since they used the swing set. It was a cool DIY swing set that I built with a slide and a club house area and it even have a little climbing wall. Alas, those days are over. The best part is that I was so safety conscious when the kids were young that I used a Trex-like decking product for all the parts where the kids would be climbing or hanging out. No way my children were going to get a splinter on something that I built.

So I had all this wood that I treated with water proofing almost every year. It was in great shape. A bunch of 4x4s and all that Trex that I mentioned too. Definitely had to recycle this wood and use it for something else. And that’s when I decided to build a potting bench from recycled lumber.

I didn’t use any plans, I did what most people who build something now a days do. I went to Pinterest to look for ideas. And there’s a lot of great potting tables and benches there for inspiration. But when it came down to it, a potting bench is really just a standing desk with a shelf on it. I’ve built desks before and I’m built shelves so this wouldn’t be too hard to figure out.

Since I had so many 4x4s I used them for the frame. Yes, the potting bench would be heavy because of this but I wanted something chunky that would look tough in the garden. Two 5 foot 4x4s for the back would hold up the shelf and two shorter ones in the front to hold up the work surface. Cross pieces would provide the support.

Now I don’t have a miter saw or anything that’ll cut a 4×4 in one pass. I had to use a circular saw to cut 1/2 way through and then rotate the 4×4 to finish the cut. This is a pet peeve of mine and really don’t like doing this. I made a vow to save up some money and get a nice miter saw as soon as possible.

To join the 4x4s I didn’t do anything fancy. When the wood is that thick you would usually use lag bolts. But that would have gotten expensive so I worked with what I had. And I had 3” screws so I used them. I pre-drilled the wood to make some sort of no-jig pocket holes. That means I toe nailed the wood with screws. This isn’t fine furniture after all. It’s going out in the yard to be pelted with rain and snow all year long. A couple of screws at each joint going in at a 45 degree angle until the joint was solid and didn’t wobble was good enough.

Next I took a few pieces of the Trex and made the work surface and a shelf underneath. You always need a shelf to store bags of dirt or large planters.

When I was looking on Pinterest, it seems like almost all potting benches have a lattice to hang tools or something. I definitely like the way these lattice look so I included one on my potting bench. This is the only wood that I used that wasn’t recycled from the swing set. I took a 2×4 and ripped it on my table saw into strips. If you don’t have a table saw you can make a vow to yourself to get one for the next project and then pick up a few 2x2s at your local home improvement store. Some glue and screws hold my lattice together and then I screwed them into the 4x4s. Nice tight fit and it’s looking good.

I recently tore out all the weeds that are supposed to be a lawn in my vegetable garden. The idea was to start over so I bought a big bag of grass seed and spread it. Now the new lawn is coming up nicely. Unfortunately the spot where I want to put the potting bench was mostly mud. Not much grass took in that spot. I guess that’s fine because grass wouldn’t be growing under the potting bench anyway. But I needed a few paving stones to rest the potting bench on so that the legs wouldn’t sink in the mud. The grass that came up in the garden area is nice and thick and doing well but there were some spots that didn’t take. And then I ripped out my old raised beds and replaced them so there was also a spot with no grass of my own doing. I’ll pick up another bag of grass seed soon and fill in the holes but for now the potting table and the garden were looking pretty good.

You know how you finish a home improvement project and make something look nice. Well it also makes whatever is next it look kind of shabby. That’s how I felt about my compost bin now. It’s a weak looking bin made from pallets with no front on it. I’ll have to fix that next.

So if you want to make a potting bench from recycled wood I think you can follow my lead and figure it out. It’s a fun project and now there’s a lot less bending when I’m in the vegetable garden and my back is very thankful.