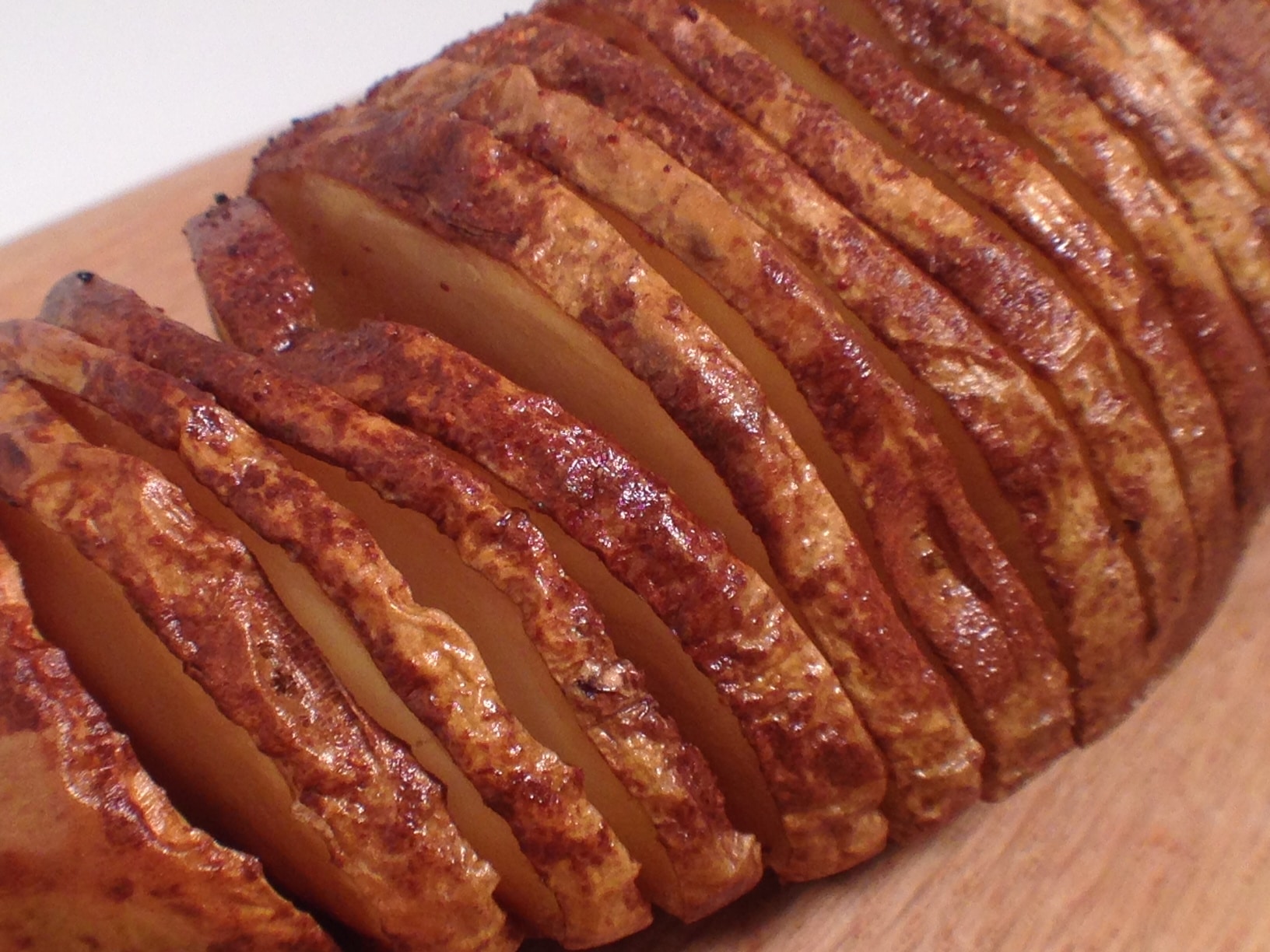 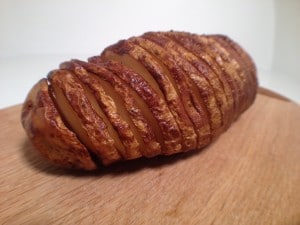 I have a confession. I’m not really a fan of baked potatoes. They’re okay and I can choke one down if I have to but only with the help of a giant wad of butter. Even with the butter, they just don’t do it for me. Now if you cover a baked potato with cheese, bacon, sour cream or any of the other stuff that you’d see on baked potato skins at your favorite bar then yeah, potatoes are great. But as they said in City Slickers, “you can’t eat bacon everyday”. And really, if you’re going to load up your baked potato with bacon and other unhealthy toppings, they why bother eating the potato in the first place. It basically becomes a junk food delivery system at that point.

Of course the solution to my problem with potatoes is Pinterest. I found a great pin about making Hasselback Potatoes on there and it’s a winner. The recipe was actually a few lines of instructions that appeared over the top of the image. Cut potatoes almost all the way through and drizzle olive oil, butter, sea salt & pepper over top and bake @425 for 40 minutes. And that was it.

So I gave it a shot and not only did I like these Hasselback Potatoes but my kids really liked them too. Wow, something the whole family likes. That’s so rare in my house. A few quick Google searches later, I had some history and even better, I also found some variations of this recipe.

The Hasselback Potato recipe was first created at the Hasselbacken Hotel in Stockholm, Sweden. I think that Swedish people must have felt the same way about baked potatoes that I do and decided to jazz up their spuds. Well, I for one am glad them did.

Now for variations, you can simmer olive oil and butter along with your favorite herbs and spices and then drizzle that over the sliced potato before cooking it. I like salt, pepper & garlic. Garlic fries are popular for a reason and it’s because garlic goes great with potatoes. I also cooked the potatoes a full hour because they were some large potatoes but this really is an easy recipe that’s hard to screw up. And be sure to give the potatoes a good scrub with a Vegetable Brush

before you cook them.

Other variations include all the baked potato skins fixings that I mentioned earlier like cheese and bacon. Sprinkled parmesan cheese would go nicely but once you’re coating the potato with cheddar and sour cream then you’re back in junk food delivery system territory that most of us are trying to avoid. Keep it simple and it still tastes great.