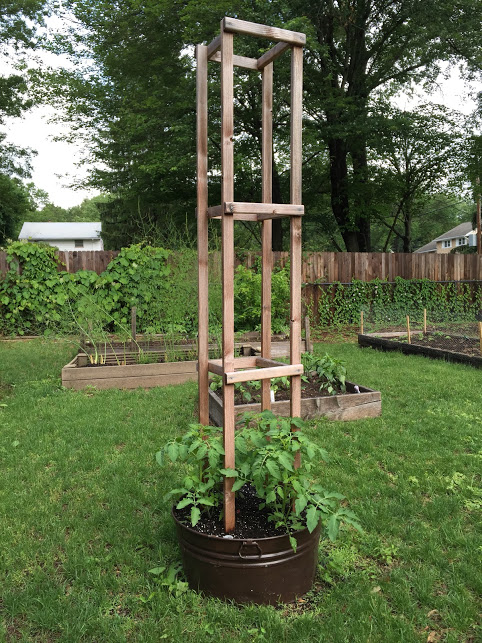 Whenever I see pictures of Supersweet 100 tomatoes in seed catalogs I’m always jealous. I love growing tomatoes but In the catalog pictures there’s these long chains of tomatoes that are perfectly uniform and red. It’s almost like they were manufactured or something.

The catalog description says, “The scarlet, cherry-sized fruits are produced in long pendulous clusters right up to frost. ” Well count me in, just let me look up that pendulous word and oh it means “hanging down loosely“. Great, consider me still counted in for the Supersweet 100 tomatoes.

Space is at a premium in my raised beds. So last season (2014), I decided to put the cherry tomatoes in a big old metal tub of a planter. I built a big trellis from a few 2×4 that I ripped into 2″ x 1/2” pieces and I was expecting the entire thing to be covered with tomatoes. In the past some of my indeterminate tomato plants have grow over 6 feet tall so I was expecting a giant tower of tomatoes.

Much to my wife’s horror, you can see the tower from my dining room or from around the pool. I told her not to worry that soon it will be filled with pendulous clusters of tomatoes. She didn’t look up pendulous but it didn’t matter because year one of the tower was a bust.

Last year’s growing season wasn’t great, lots of rain, lots of fungus, then crazy hot humid temps. The tomato tower that I planned turned out to be a lot smaller and less productive. A better name might have been the tomato bungalo or the tomato colonial. The vines only grew to about 3 or 4 feet and the metal tub was always dry even when I watered it every day. Those conditions let to a few tiny little tomatoes that I wound up leaving for the chipmunks.

But I learned from the experience and I’m trying it again this year.

I’m trying again because I want to eat tomatoes everyday in August. And also because it was really heartbreaking to hope for something awesome, do the work and get basically nothing from it. It’s like wasting my time in the garden. And once again we can talk about my wife’s horror, if I spend all that time in the garden and we don’t get a crap load of vegetables out of it, then it’s wasted time that could be spend doing something from the HoneyDo list. And I can’t give her any more ammunition in that argument. So I declare 2015 the year of the tomato tower II.

I’ve even thinking about doing some wood burning on the trellis and letting everyone within sight distance of it know that I have officially named it the “Tomato Tower”.

Self watering seemed like the way to avoid the watering issue. This way, the plants could drink all they wanted and if I had to skip a day in the garden, they’d be okay.

The way these self watering planters or seed trays work is that there’s water underneath and there’s a cloth or a compartment that’s in contact with the soil and the water and there’s a wicking action like the soil is drinking up the water.

First I had to plug the holes in the container because what good would a water chamber be if it didn’t hold water. A little bathroom chalk did the trick.

To make the compartment that will hold the water and keep the soil out, I cut 4″ sections of drainage pipe and fit them into the bottom of the tub. I wound up cutting a few extras because I forgot that I needed to leave room for the trellis in there too.

Then I got an old cotton shirt and put it over the pipe pieces. Next came the soil and I had a self watering planter ready to go.

I also cut the bottom of a milk container off and put that in there for easy watering. I just pop the top and fill it up with the hose. I can even put fertilizer in there. Last step is to drill a couple of holes in the sides for drainage. This is In case we get crazy rain that fills the container and turns the soil into a soupy mess. With the drainage holes, this shouldn’t happen.

As long as the top doesn’t dry out (probably because the soil and water lose contact) it will suck up the water from underneath.

And my tomato plants are still pretty small because it’s only May but they’ve been doing pretty well since I planted them.

I’ll definitely post some tomato tower updates in the future, whether the experiment is a success or failure.

Note that the picture above with the pool in the background is from June 3rd.

The tomato seeds were started indoors in March and transplanted outside on May 16th.