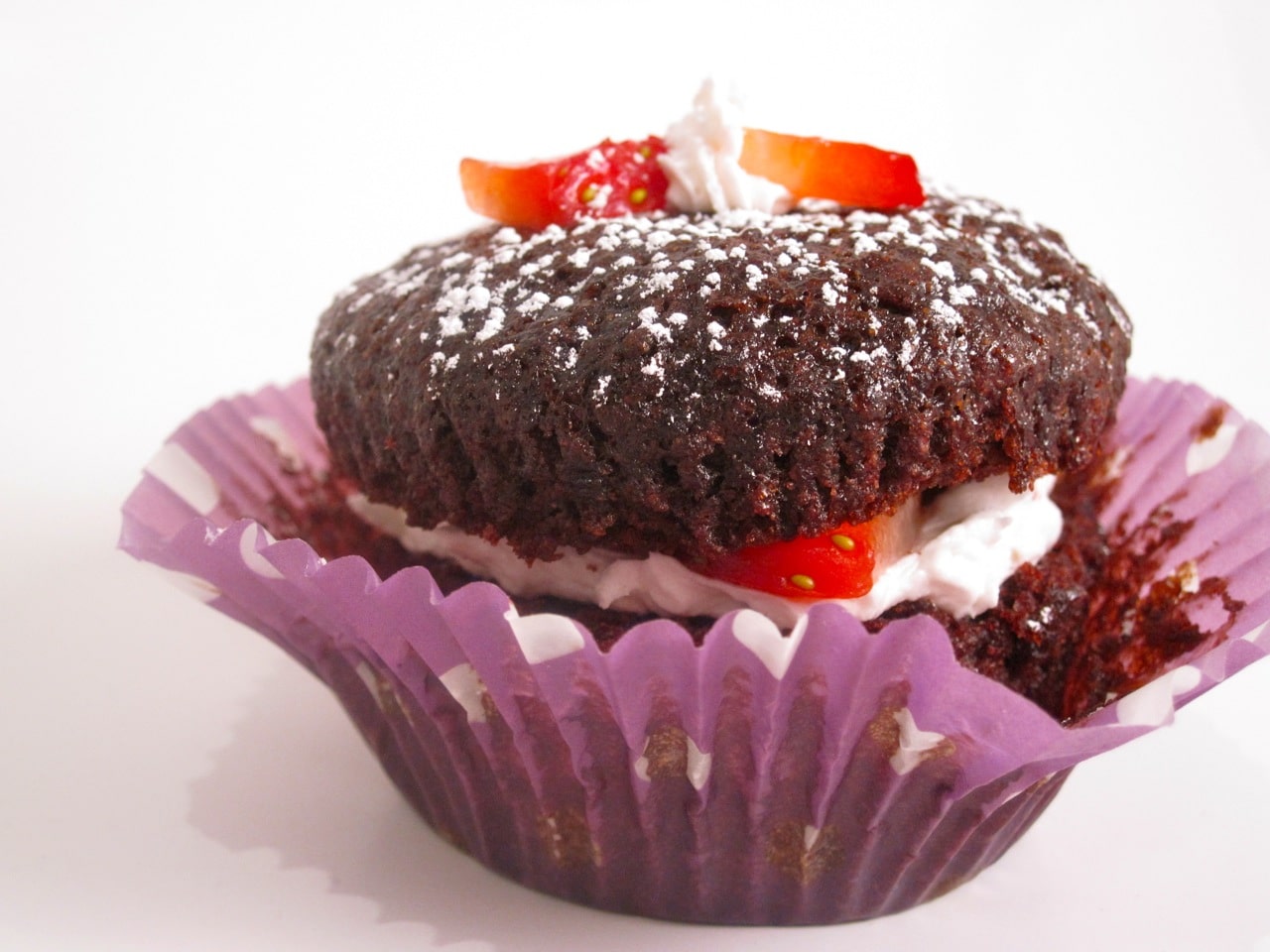 I like trying new things and that definitely includes food. When my wife was asked to bring dessert to a baby shower recently, I jumped at the chance to help out. Hey, I’m a guy who likes to do woodworking projects and I also bake cupcakes, deal with it. But these aren’t just any cupcakes, they’re gluten free vegan cupcakes.

The mom to be is a vegetarian who was recently diagnosed with celiac disease. She’s also lactose intolerant. So basically, we needed a gluten free vegan dessert to satisfy a pregnant woman. Yikes, you’d think that would be a huge challenge but it actually wasn’t too bad.

It wasn’t too bad because I had remembered seeing vegan cupcakes win it all on the Food Network show, Cupcake Wars. Chef Chloe Coscarelli won with a few different cupcake recipes but the one that I wanted to try was the chocolate strawberry shortcake cupcakes. They really looked delicious, even through the TV. You can find her recipe and lots more vegan recipes at her site, Chef Chloe. Definitely worth a visit. Go ahead and check out her site now, I’ll wait.

I’ve actually made the chocolate cake part of this recipe before, but I just threw all of the batter into a bundt pan and scoffed the whole thing down without any icing. Probably wouldn’t win Cupcake Wars like that but there’s no time to worry about presentation when you’re starving. When I made them this time I wouldn’t be starving and they would also have to be gluten free. Luckily she addresses this in her recipe. To make these cupcakes gluten free you can substitute the all-purpose flour with gluten free flour and 3/4 teaspoon of xantham gum.

Being someone who likes to try new things, I altered the recipe a little this time and messed with the liquids. The recipe calls for 1 cup of coffee, water or coconut milk. I went with 1 shot of Patron XO Cafe (coffee flavored tequila) and topped off the rest of the 1 cup measurement with coffee. I’m happy with the change that I made. I think it added a slightly more intense flavor to the recipe and it wasn’t at all boozy.

My wife said the cupcakes were a big hit at the shower so that worked out well. But I’m more excited about the extra batch that we ate at home. Delicious!

Who wants to make the same old recipes over and over again. There’s so many cool foods out there to try and great recipes can be found with a just a few clicks. I’m glad I tried gluten free vegan cupcakes.

And Chef Chloe is also coming out with a cookbook, Chloe’s Kitchen: 125 Easy, Delicious Recipes for Making the Food You Love the Vegan Way

. I’m looking forward to trying some of her other vegan recipes. If they’re as good as these cupcakes were then I’m sold. I already pre-ordered the book, so a review will be in the works.