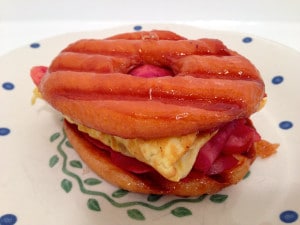 Have you seen the new breakfast sandwich from Dunkin Donuts? It’s a bacon and egg sandwich but instead of a roll or bread, they put it on a glazed doughnut. Now that sounds like an awesome sandwich to me. I’ve never had one but I’m sure it must be delicious. So here at the GoodStuffAtHome Test Kitchens (not a real thing, it’s just what I like to call my kitchen on the weekends) I have decided to one-up Dunkin Donuts and make an even better glazed doughnut breakfast sandwich. To raise the bar, I made my glazed doughnut bacon and egg sandwich in the panini press. Everything is better as a panini.

Panini and breakfast go together like peas and carrots. I even have a whole chapter devoted to breakfast in my Panini Press Cookbook.

So this seemed like a good fit. I still have to tip my hat to Dunkin Donuts though because not only did they come up the inspiration for this panini but I also bought a couple of their glazed doughnuts to use in my dish. I have a few great doughnut recipes but my turkey fryer (which is great for doughnuts by the way) is somewhere in the garage. So I took the easy way out and bought my doughnuts at the store. Someday I’ll make this meal entirely from scratch and make it all myself but it is not this day.

Start off by preheating your panini press and slice the glazed doughnut in half like a sandwich. You can cook the bacon in a pan on the stove or on the panini press. Bacon on a panini press comes out nice and crisp. Cook the bacon and set it aside. Next up is the egg. You can either fry the egg or scramble it. I prefer the scrambled style but I don’t mix it up, so it’s more like an omelet.

The glazed doughnut gets all hot and melty like it just came out of the oven. And the hot sugary doughnut goes great with the salty, meaty bacon. It also tastes like a professional doughnut baker just dunked your panini into a container of hot sugar icing and then handed it directly to you and said, “No time to put this on the shelf, you had better eat this right now son.”  Thank you mister baker.