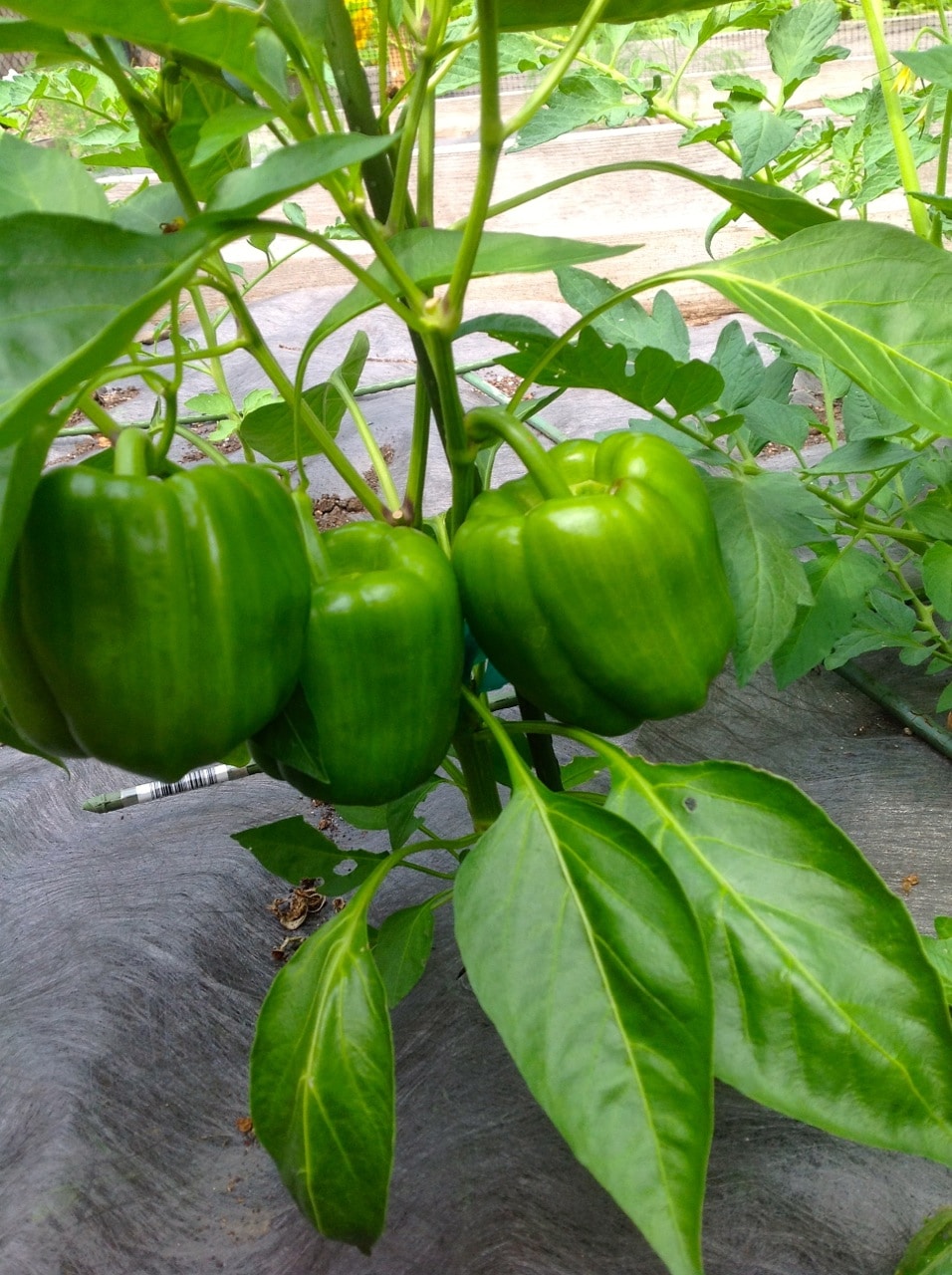 Here’s what’s going on in my garden this summer. Despite temperatures in the upper 90ies for what seems like months (I think it’s only been about 2 weeks though) my vegetable garden is looking pretty good.

Weeds – First off, I would like to talk about weeds. The past few years, the weeds have gotten the better of my vegetable garden. It’s a never ending battle that I usually keep up with for a while but once the high humidity of summer kicks in, I start to fade. And when I’m not out a few times a week pulling weeds, the weeds take over. When the weeds gain control of the garden, I tend to give up on gardening for the season and focus my attention on other hobbies. It’s sad but true.

Well this year, I put down some landscape fabric over my raised beds and cut small holes for the plants or seeds. It’s actually doing a great job of keeping the weeds manageable. I should have tried this sooner. In the past, I’ve tried putting down lawn clippings or hay or even unfinished compost but the weeds seem to thrive in any of those environments. Sure landscape fabric is probably some sort of plastic or oil based product that is totally not “green” but when I consider the other options, picking weeds for hours in 90 degree heat or giving up on the garden, I’m going to pick the landscape fabric. You’ll never find Roundup or any other chemical weed killer in my yard so I’m okay with this.

Asparagus – I put some asparagus crowns in this season and they seem to be doing well. I won’t be able to harvest any asparagus for a year or two but I don’t mind long term gardening. Until the plants are established, you have to let them turn into these big crazy ferns. How do I feel about big crazy ferns? Awesome, sign me up.

Tomatoes – You can’t have a vegetable garden in NJ without tomatoes. I start mine from seed and this year I’m growing San Marzano, Jersey Giant, Omar’s Lebanese & Cherokee Purple. Plus I grabbed a few tomato starts from Lowes but I don’t really remember the varieties. In the old Stake vs. Cage debate, I’m a strong believer in the Stake. What’s good for killing vampires is also good for growing tomatoes. I’m also big on pruning those suckers to keep the plants productive.

Peppers – I really should have planted more peppers but I didn’t. Like the tomatoes, I start my peppers from seeds and I’m growing Emerald Giant Bell Peppers and poblanos. I also started some old Black Knight Pepper seeds that I had for about 5 years. They all germinated but the plants are still tiny. I may not get any peppers out of them unless it’s a really long growing season. I think they might have been ornamental peppers anyway. I must start writing this stuff down.

Cucumbers – For a few weeks now, I’ve been eating garden cucumbers just about everyday. I built a nice cucumber trellis and fenced off the raised bed to keep the rabbits, woodchucks and my mother-in-law from eating everything and so far so good. I forgot exactly what types of cucumber seeds I planted but I’ve been eating a pickling type that look like Kirbys and I think I might have tried Hmong Reds too. No Hmongs yet but they’re flowering so I should get something soon.

Squash – I have some Costata Romanesco zucchini and some Lakota squash. Haven’t tried either one before but they seem to be flowering nicely.

Watermelon – I never grew watermelon before so this may not work out. But I picked the Moon and Stars variety. Even if they never get ripe (like the cantalopes I’ve grown in the past) they will still be cool looking.

Pumpkin – I have two Dills Atlantic Giant Pumpkin plants growing in a single 4×8 raised bed that I loaded with compost and manure. A few years back I grew a 75 pound pumpkin from a Big Max Pumpkin seed so I have high hopes for the Dill’s Atlantic Giant. Last year I let a volunteer pumpkin vine take over a big area of the yard to make a pumpkin patch. I drove my daughter and her friend around in the wheelbarrow and took them “pumpkin picking” in the yard. Pumpkins are always fun.

Potatoes – My potatoes are kicking so much butt that they’re going to get their own post sometime soon.

Fruit – As usual I’m growing blueberries & strawberries and as usual, the chipmunks, birds and my children are eating all of the berries before I get any.

So that’s what’s going on in my garden in 2012. I’d like to get some fall vegetables in soon too. Carrots and beets and maybe some Pak Choy and spinach too. But with temps hovering near 100, it might not happen.