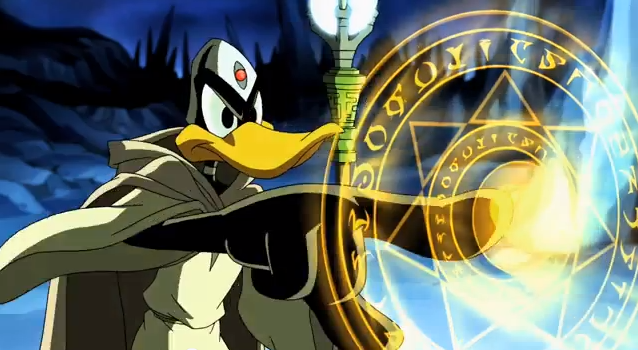 My kids are both under the age of 10 and when you mention Bugs Bunny, they think of a baby bunny wearing a diaper. You see, Looney Tunes isn’t really on anymore and their only exposure to Bugs, Daffy & Elmer are from this awful show called Baby Looney Tunes. Once a year in June they’ll run a Bugs Bunny marathon called June Bugs but other than that, it’s hardly ever on.

But that is changing thanks to the Cartoon Network. They’re aiming to introduce kids like mine to all of those great characters by creating a new show called The Looney Tunes Show. It’s all of those favorite characters in a new updated show that makes sense to kids. Bugs Bunny wearing a dress and kissing Elmer Fudd has been replaced with the use of cell phones and the Internet. You’d think that this could go horribly wrong but the show is excellent. It’s really well done.

Here’s a quick video of Daffy Duck the Wizard. They interrupt the half hour long main story line of each episode with a couple of shorts. This is one of the shorts that has become very popular on the Internet.

And here are the words in case you want to sing along to Daffy Duck the Wizard. It’s really catchy.

Behold the wizard.
Beware his powers.
Unspeakable powers.
Under the gaze of the necromancer.
A silver staircase starts to rise.
People stand on it and marvel at the power shooting from his eyes.
Cold food becomes hot again,
When his spell unfolds
With a mere wave of his hand,
His hot dog will explode!
In the presence of the wizard,
Traffic will stop at his will.
He can cross the street, no problem,
As the cars bow down in front of him.
Channels on the TV change.
He’s still in his chair.
Then he pulls his magic wand, and reclines in the air.
By the dim light of the dream realm’s black sun,
The Wizard climbs the frozen waterfall of Voldrini in search of Celestia,
The guardian of infinite power.
When suddenly a terrible Garlon appears and attacks with ice,
But the Wizard is undeterred.
The Garlon roars and unleashes the most sinister wind, but the wizard is undeterred.
The Garlon summons the stones of Prophynia, but the wizard is undeterred.
Calling upon the powers of the ancient,
The wizard conjures a sacred fire and casts his foe into the molten maw of an insatiable Gort. Thanks, Gort.
Ahh, Celestia. I think you’re going to enjoy this.
The Wizard stands on the precipice of ultimate power
The gates open to reveal…

Ohh! How long was I asleep?
Three days. You have a bed, you know.
I’m starving. I gotta get something to eat

Famished from his latest quest, the wizard seeks a snack.
He sets sail for ecstasy at the Quesadilla Shack.
He is the wizard!
The mystical wizard!

2 thoughts on “Daffy Duck The Wizard”