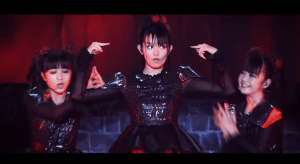 If you check the iTunes charts in the Metal category, you’ll find a group called Babymetal holding the number one position. The music is definitely metal, there’s a thunderous drum beat and kick ass guitars but the vocals aren’t quite what you’d expect. The lyrics are sung by three young girls in a Japanese pop star fashion.

Babymetal is sort of a cross between Hello Kitty and Iron Maiden. It’s hard to describe but one thing is certain. You haven’t seen anything like it before and I really like it.

This song is called, “Gimme Chocolate”.

This song is called MEGITSUNE