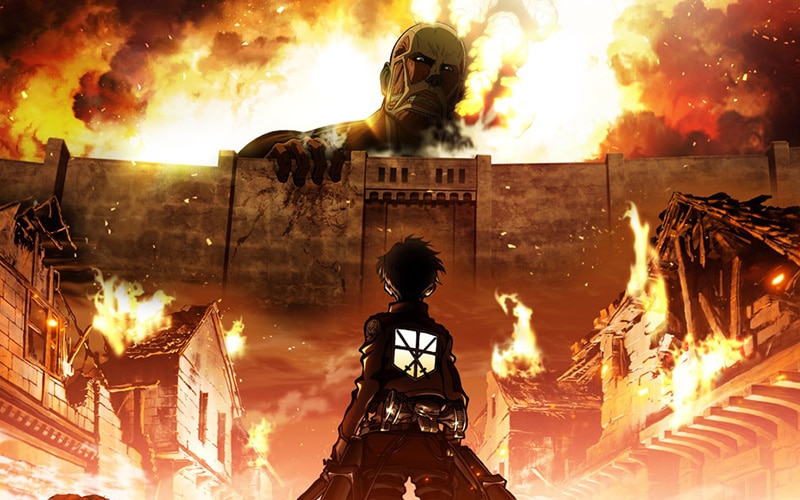 Recently I discovered Attack on Titan on Netflix. It’s an anime series about the last of humanity that lives behind these tall walls that protect them from the Titans. The Titans are these giant human looking naked monsters. Titans have no genitalia so I guess naked is the way to go in that situation. Sounds crazy right? Well it gets better. The Titans are creepy as hell with blank expressions or even worse, insane happy expressions on their faces. And they eat the humans! Definitely the stuff of nightmares.
Attack on Titan is also about the military that is trying to fight these Titans. We follow Eren, Mikasa & Arwin through their basic training. The military has these outstanding Omni-Directional mobility units and big ass swords to fight the Titans. The Omni-Directional mobility units are some kind of gas powered harness that shoots cables with hooks to propel the soldiers around the city and bring them high enough to fight with the Titans. There no way something like this could exist in real life but they’re really cool and when the soldiers use them, they move around like Spider-Man swinging from his webs. Really awesome!
Turns out I’m totally late to the party and Attack on Titan is becoming this gigantic pop culture phenomenon all over the world. It’s the number two best selling manga of 2014 and it’s getting even more popular. The live action movie version opened up number one in Japan despite less than glowing reviews with part 2 coming soon. And the movie is even coming to US theaters this fall with part 1 on September 30th. Part 2 will follow on October 20th.

Even the theme song is really good. I don’t speak Japanese but i find myself humming the opening all the time. And my teenage son who doesn’t like anything is actually watching the show now too. Usually he’s too cool to like anything that Dad likes.  He mocked me as I binged through the first season but now he’s totally into it. Once you hear the Attack on Titan Opening it really sucks you in.
And Game of Thrones has nothing on Attack on Titan when it comes to killing off main characters. Really anyone can die at any time in this series. The battle against the Titans is that hopeless.
So if you want to binge on 25 episodes of an outstanding, action packed, depressing, end of the world anime, then cue up Attack on Titan right now.
Here’s the Attack on Titan Opening lyrics to get you started.

Attack on Titan Opening
Unknown are the names of the flowers that have been trampled
Birds have fallen to Earth and long for the wind
Praying won’t solve anything,
Only the will to fight can change the here and now!
O pigs who laugh at the resolve to walk over corpses to move forward
Livestock complacency? False prosperity?
Give us the freedom of dying, starving wolves!
The humiliation of being caged is what triggers us to fight back
We hunters slaughter prey beyond the castle walls,
consumed with surging bloodlust,
as our crimson blows an arrows pierce scarlet holes into the twilight.